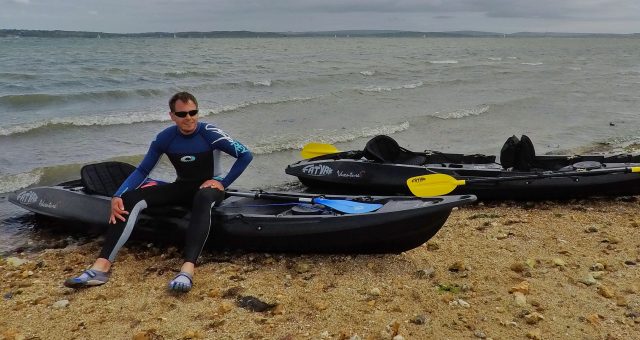 We loaded up the Fatyaks on Sunday and headed to the coast. Destination was Lepe beach in Hampshire, over looking The Solent and Isle of White. The weather was sunny, the water was supprisingly warm but the great british weather had to throw in some wind to the mix.

Transportation of kayaks is always an issue. The size and shape of them always makes it a challenge. Below you can see in the photo our transport, to the left a LandRover Defender 110 with a pair of cross gutter roof bars, on the right a Mazda CX5 AWD, again with standard roof bars, but also “J” kayak holders fitted. We traveled down some 30miles to Lepe beach in Hampshire. Neither of us had any issues with the loads moving or creating any issues up to motorway speeds and on country lanes. 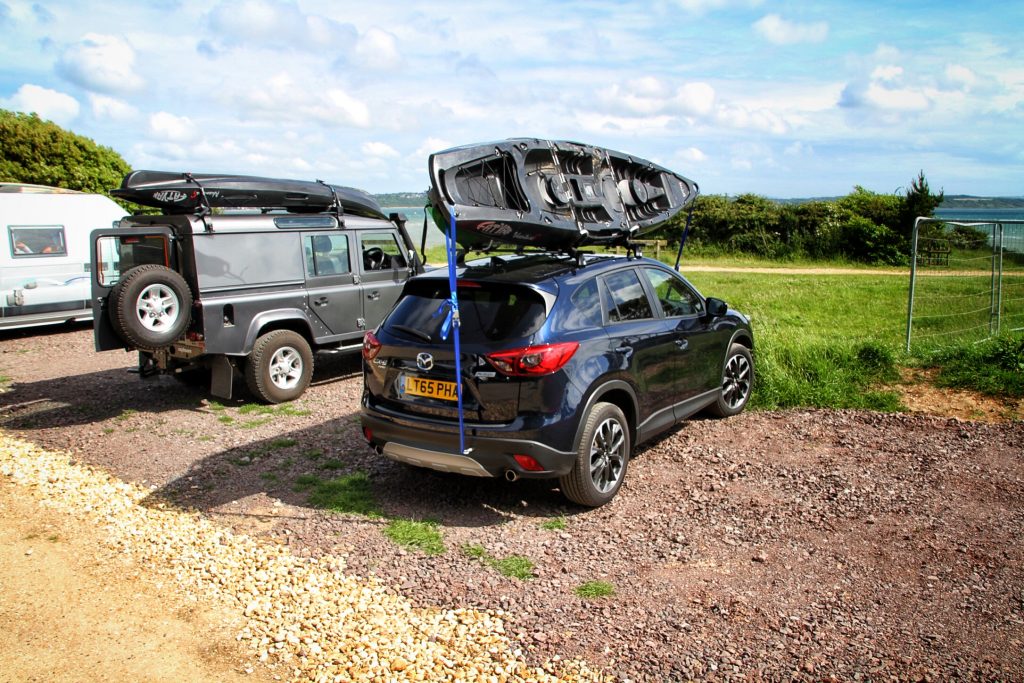 Both transportation setups have pro’s and con’s. The Landrover setup is rocksolid, with no movement of the load as it was tightly straped against the bars and the flat top surfaces of the Fatyak. However being a large 4×4 and high off the ground lifting the kayak on the roof could be difficult if you are not very tall. I can load the Fatyak™ Adventure S Mahee Kayak on my own. Weighing only 26kg I can lift this abover my head and slide it on the bars, however my 6’1″ height also helps me.

The Mazda CX5 is a more standard family hatchback. On Sunday this was loaded with 2 kayaks, a Fatyak™ Adventure S Mahee Kayak and a Katyak™ Surf Kayak. We had 2 sets of “J” bars installed, one for each kayak. It is highly recommended that with this setup, you strap across the kayaks to the “J” bars and tie both the front and back of the kayaks to the towing eyes on the car, as you can see with the blue straps in the photo above. With the lower roof height 1 or 2 people can easily load the kayaks on a normal family car. I followed this setup on the drive down to the coast and it didn’t move at all.

Sunday was a true test of the Fatyak™ Adventure S Mahee Kayak family freindlyness. In the photo below you can see my freind Dean and his wife and daughter all loaded up. Safety first of course, everyone has lift jackets! Space wasn’t an issue with 3 loaded up and there is still the rear storage area and plenty of space between your legs for a rucksack, beach towel, whatever you take on a days outing. 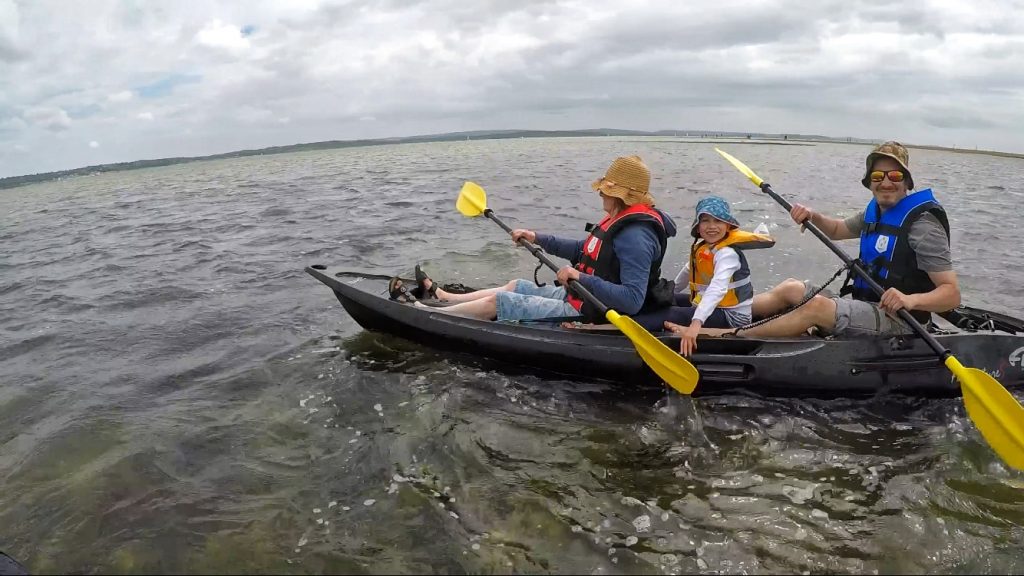 With 2 adults paddling the Fatyak™ Adventure S Mahee Kayak moved very easily through the water. It was a windy day, 15mph+, which I would say is the limit for safe kayaking. We could all feel the wind, especially when we turner side on to it, pushing the kayaks and catching the paddle blades. The sea only had a small chop but some boat wakes came past and the kayaks performed very well both nose in to the waves and side on. Stability was excellent in the conditions we experienced. We got very little water in the kayaks throughout the whole day and what did enter soon drained away through the scupper holes in the base of the kayaks. 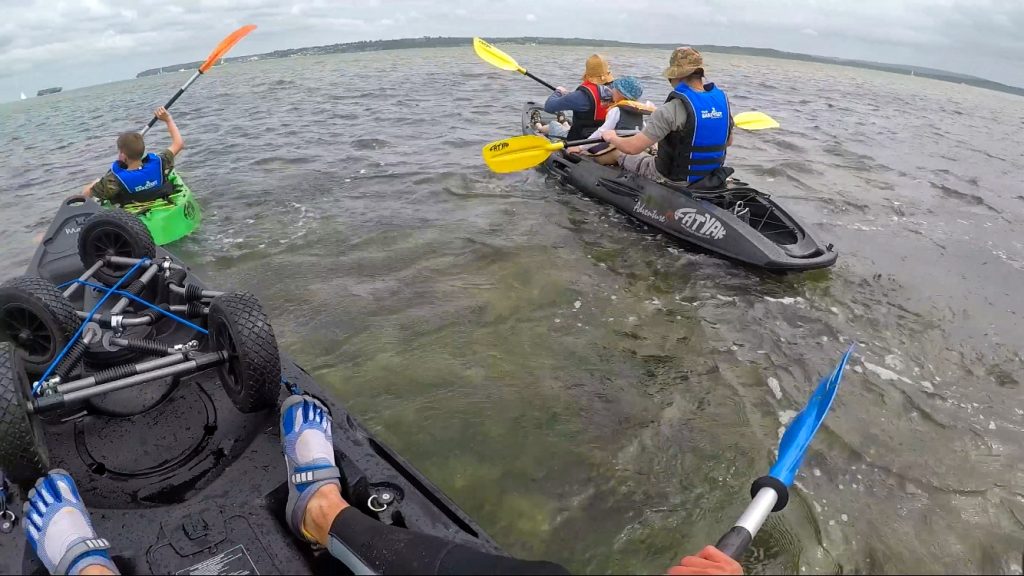 I was paddling the second Fatyak™ Adventure S Mahee solo. This was to see how they performed for some trips later in the year. Dean and myself will be doing some coastal and river camping trips. So we will be loading up the front of the kayaks with camping gear and paddling solo on those trips. In windy conditions you can feel the bow being pushed without a second person providing power, but this is to be expected. However paddling solo was no issue otherwise. The kayak moved easily through the water, turning wasn’t an issue. The bow didn’t run any more noticeably higher with one adult only onboard. We had the “Komfort seats” and everyone found them to be comfortable and support your beack very well. 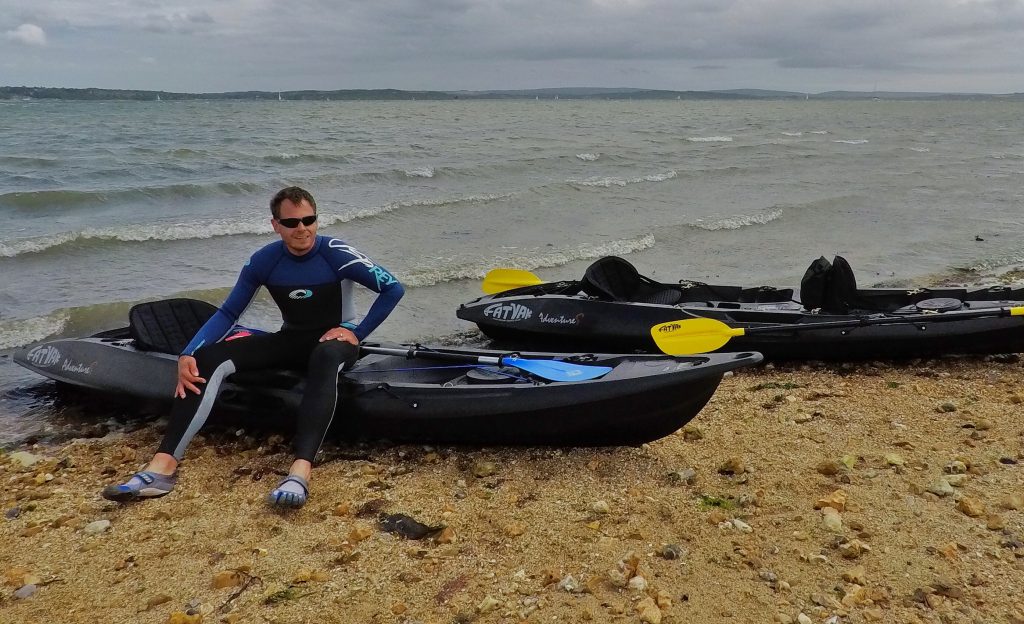 Fatyak supplied the standard trolly wheels for moving the kayaks around from the carpark and down the beach. These performed well, however we both found that you do need to strap or bunge the kayak to the wheels becasue on any ground that isn’t level, we had isses with the kayaks over balancing and falling over. Once they were strapped to the wheels we had no further issues.

All in all, we had a great day Fatyaking. we have many more trips planned and you can follow the, on TheManOutdoors blog and Instagram page. We will report back on how the Fatyaks hold up on a longterm test over the summer. We will be doing some videos setting there stabilty and sea worthiness also, so keep checking back.

In May and June this year (2020), I’ve been contacted a number of time following my review above, asking about the product experience long term. He is my honest account.

We used to Fatyak’s a couple of times in late 2017 on the South Coast of England and had a couple of great days out. Due to personal reasons I didn’t get out again until Easter 2018 in the lake District. However this trip was a disaster. The Fatyak sank in Lake Windermere.

I noticed a small amount of water inside after use a few times but never really clicked. Then I went to the Lake District with my girlfriend with one. The first day out on Windermere and we had gotten to about 25m out, started to notice it riding very low in the water and becoming hard to move. I realised it was filling up with water inside the hull. We start to try and turn for shore, we got to within about 10m and couldn’t keep it upright any longer it was very low in the water. We tipped out, by then in about 5ft of water. The Fatyak looked like the scene from Titanic and the arse of the Fatyak sticking up in the air, the front on the bottom of the lake. I dragged the Fatyak ashore, I could hardly move it there was so much water inside, checking the drain plug, this was in place and tight with the rubber o-ring inplace (the only place where water should have been able to get in). In the process of getting it ashore I lost a £500 Gopro which was mounted on the front and got broken off when it sank, also very expensive perscripton sunglasses.

We both pulled the Fatyak ashore and rolled it over to see where water was leaking out of. Two of the scupper drain holes under the front seat had split within the holes. I could push and rip the plastic open within the holes with just a finger. The plastic felt no thicker than food wrap or a cheap plastic bottle. The hull had no scatched on the bottom it had never been dragged up and beach, dropped etc.

My girlfriend was already nervous on the water and this experience didn’t help, she was quite upset, to think 5-10mins later we might have been in the middle of the lake as we had planned to go across to a pub for lunch on the otherside. We had wetsuits and life jackets on and a mobile in a waterproof case, I would never do any water sports with out a life jacket or means of getting help.

While we waited for the Fatyak to drain which took a long time, I call my friend (in the photo above with his wife and little girl), I was aware they where in Cornwall that weekand with the other Fatyak. I explained what had just happend and he inspected the Fatyak he had while I was on the phone, he discovered to his shock the same issue as myself with the very front pair of scupper holes. Very thin plastic that he was able to push through also.

On the following Tuesday I contacted Fatyak and they were very dismissive of the problem, they didn’t feel it was a safety concern or a product recall was needed. Both Fatyaks at this point were under 1 year old and they offer a 3 year warranty as standard. When fatyak refused to do or refund anything, I went all over social media and contacted trading standards. I ended up having to go directly to the MD of their parent company Kingspan in Ireland after posting YouTube video and photos all over their Linkedin business page, Instagram tagging them and Facebook, I finally got contact from the MD.

Even talking the MD of the business, they still appeared very dismissive of the issues. They basically said, you got them free to do promotinal work so it doesn’t matter. My issue was with this, is that there was obviously a manufacturing issue for 2 Fatyaks to have the same issues and peoples lives were possibly being put in danger with possible fault products. These were not prototypes or pre-production examples, they where both full retail models which I collected in person from the factory and saw them come out the storage racks with dozens of others.

I received some compensation from them after months of communications, but the whole experience, customer care and company attitude left being feeling very angry. Personally I can’t recommend the brand. However everyone has the freedom to make their own choices on the products you buy, these are simple my honest experiences without any prejudice. I’m sure lots of people have had fun using their products and will contiune to, I hope I was just the unlucky one on this occasion.

All I do say is PLEASE PLEASE check and DOUBLE check all equipement, no matter what brand you have, before going on the water. Even a product like a Kayak which you just look at as a big lump of plastic, can be faulty or become faulty over time with wear and tear. I learnt a very valuable leason myself on water safety from this experience.

Please keep safe on the water.

I’m on a coddiwomple #themanoutdoors #outdoors #

Being by the sea is so good it make me dribble🐾

Well I’ve never seen or heard of this manufactur

@hiowaa56 dropped in to the village today to help

Some day I would love to build an epic overland tr

Some days you feel like your legs are just going t

Why do we insist in continuing to miss treat this

Flying with the Canadian Geese going to bed. #the 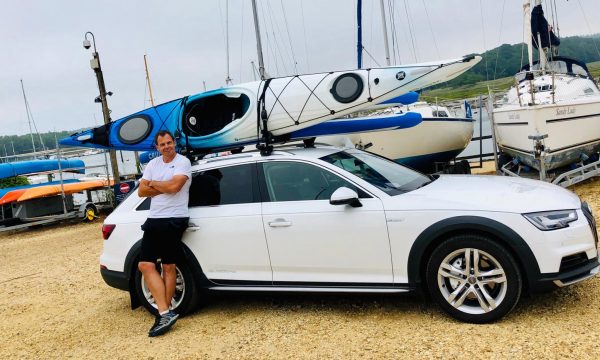 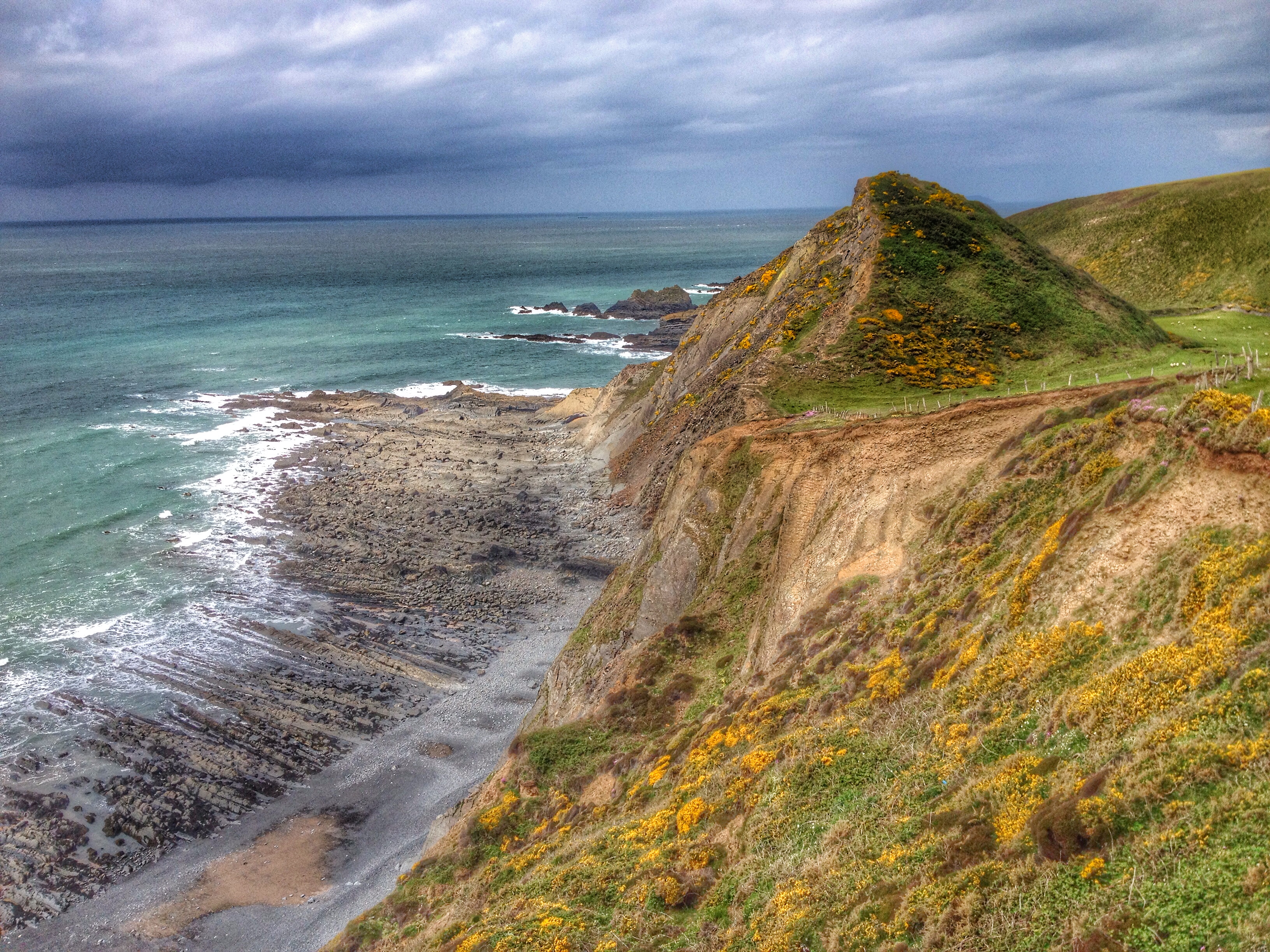 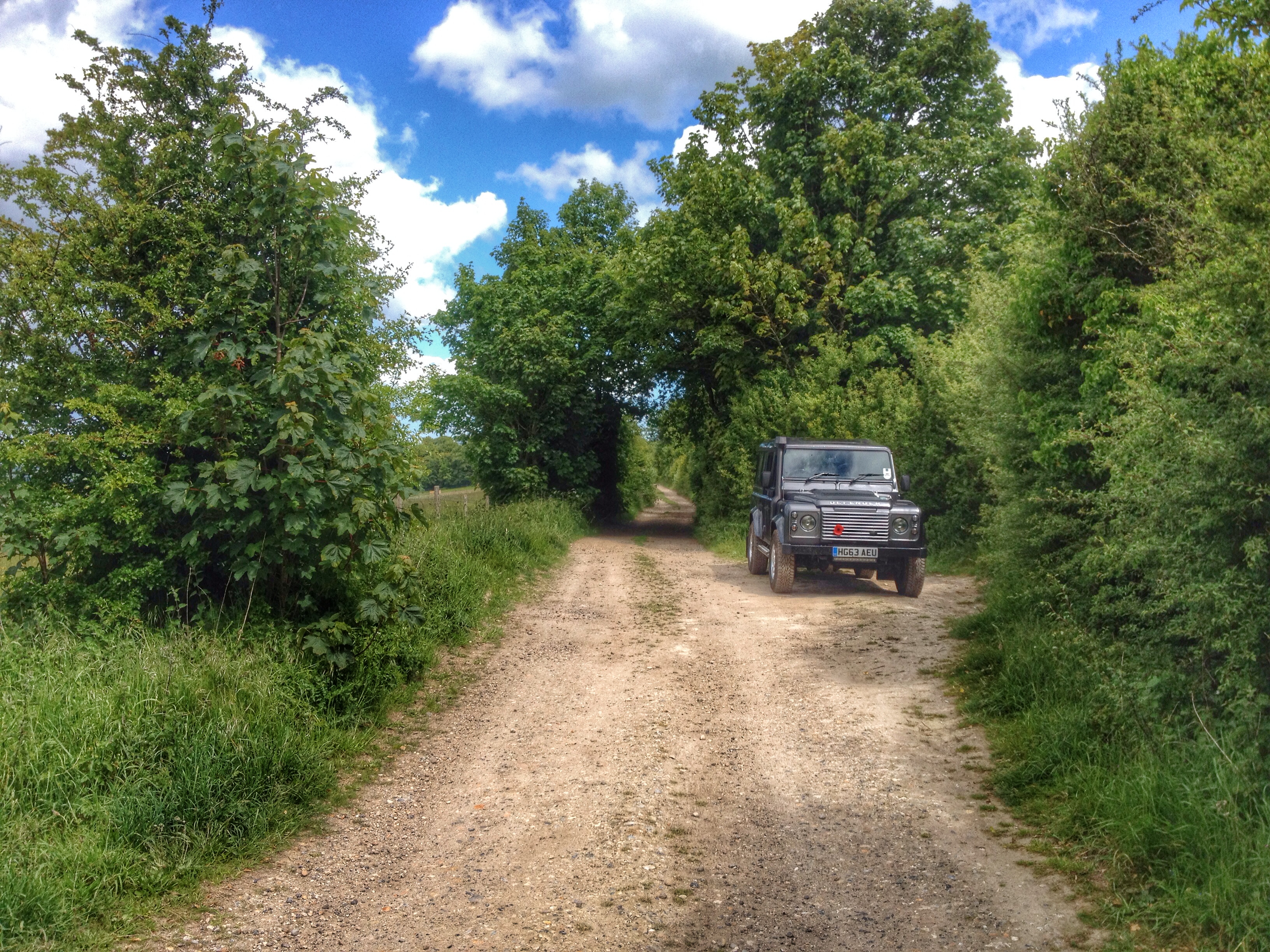 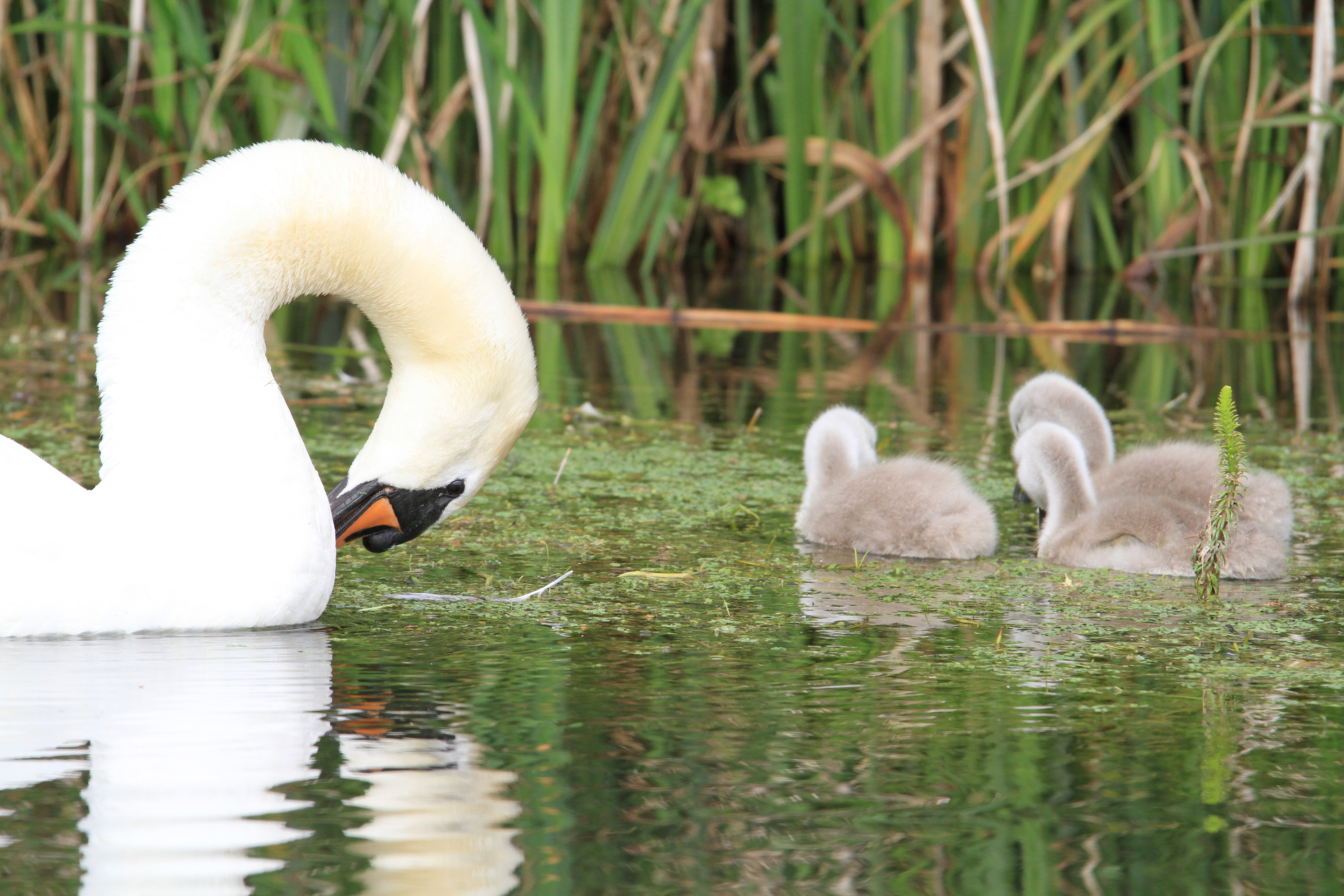 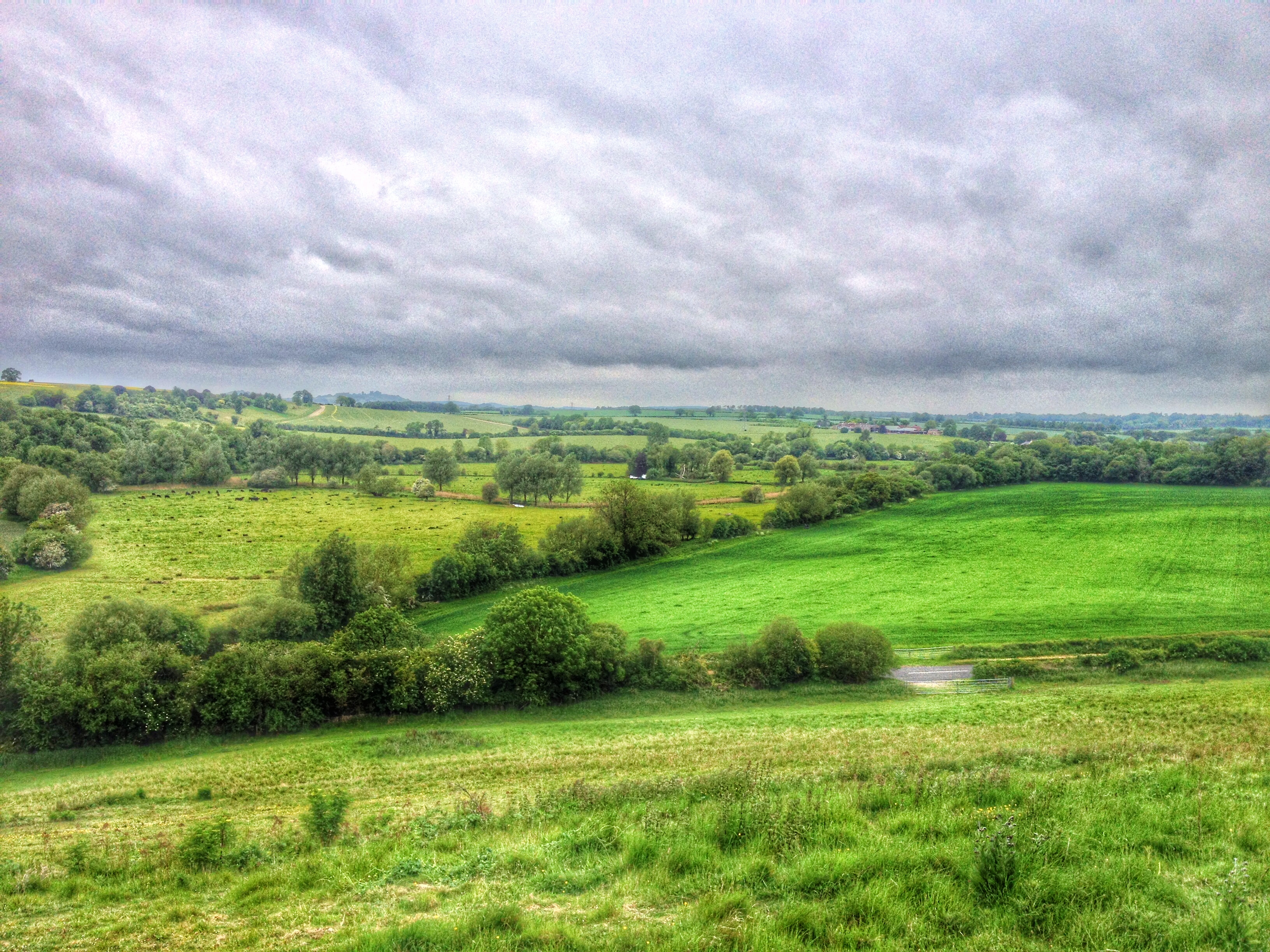